We arrived in Linz, Austria quite early in the morning.  Linz is a small city, right on the river Danube and it serves as one of the main economic centers of Austria.  Linz is known for it’s steel production and serves as a key component for Austria’s economy.   However, we weren’t really here to explore Linz.  In actuality, most if not all of the guests were taking a two hour bus ride to visit Salzburg.  Salzburg is known for being the birthplace of Wolfgang Amadeus Mozart and for being the setting of musical and film The Sound of Music.

Our bus ride was about two hours, of which our guide spent a good deal of time playing songs from The Sound of Music and having us sing along.  To my chagrin, I knew a lot more songs than I expected; then again I also watched The Sound of Music on the cabin room’s iPad.  On our way there we stopped by a highway rest stop and had opportunities to take some photos and buy some snacks.  When we finally arrived, we were split into tour groups to begin our exploration of Salzburg.  We first walked through the famous Mirabell Gardens.  There were many well kept flowers that were quite impressive.  We took many family pictures there as they were so entrapped by the beauty.  We continued to walk towards the river before crossing a bridge to the Getreidegasse, the Grain Lane in the Old Town side of Salzburg.  The Getreidegasse is essentially a long shopping street with various local and foreign shops selling various things, from designer brands to local trinkets.  Every once in a while there were storefronts that sold food.  I bought a Bavarian Weisswurst or white sausage that served as a snack as we walked around.  After checking out more of the local sites, the guide recommended some places for lunch and we began to split off.  We ended up choosing a local Bavarian cuisine restaurant where we got to try more local things such as pigs foot, sausage and more.

After we finished lunch, some of our family wanted to check out another outdoor market along the river, while the other group wanted to just sit and wait for the bus.  Unfortunately, minutes after deciding, the weather changed dramatically and it started to rain quite heavily.  Luckily, after waiting in line for about 10-15 minutes, we were seated at a table in a cafe enjoying some light refreshments as we waited for the buses to return.  When we finally started to walk back to the Mirabell Gardens, where the drivers were picking us up, it began to rain much harder.  By the time we were safely back on the bus and on our way back to Linz, many of our party had wet clothes.  Most of us fell asleep as we cruised along the Autobahn back to Linz.

When we returned, the ship was planning on leaving Linz for Passau, Germany in a couple hours, but some of the guides decided to do brief tour of Linz.  All of my family decided to retire back to the ship in order to get some rest before dinner, while I went out once more to see Linz.  It was a very brief tour but we walked through the main square, saw where Johannes Kepler lived, as well as where Hitler gave his triumphant speech over the annexation of Austria. It’s a very quaint city, but it definitely had some uniqueness and charm to it.  Unfortunately, we didn’t have much time to spend there as the ship had to push off to then sail into Germany. 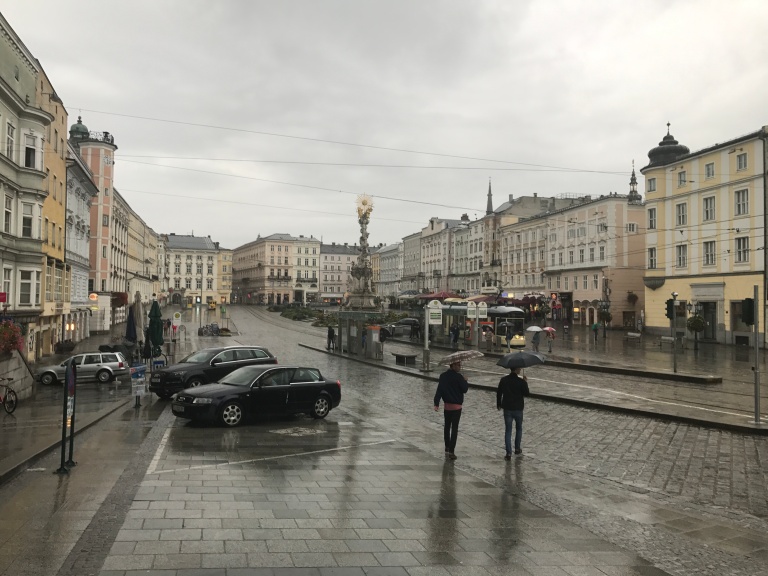